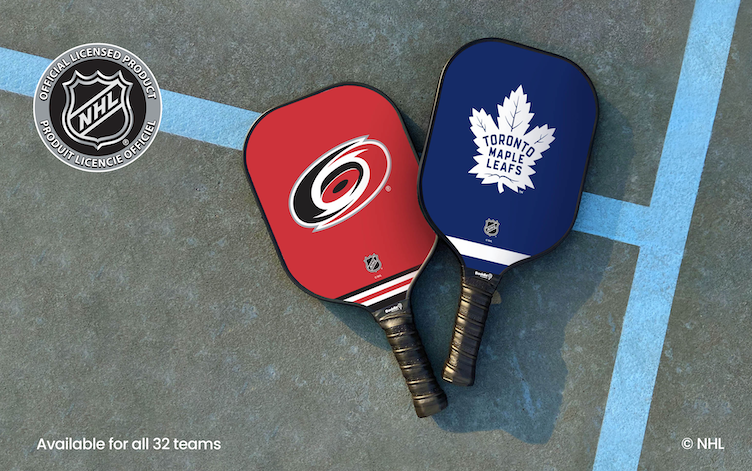 NHL-branded pickleball paddles, paddle covers and grips will be available in Q2 (with wholesale preorders starting sooner.) All pickleball gear will be designed for each NHL team and feature team colors and marks.

NHL pickleball paddles, paddle covers and grips will be available for preorder in April 2022 on baddle.com. They’ll also be sold through Amazon, Google Shopping, Facebook Marketplace, and select retailers. All Baddle NHL pickleball paddles are tournament approved by the USA Pickleball Association and feature a large sweet spot, perfect for beginning and intermediate players, a honeycomb core for power and a spingfit surface for ball spin/control.

Pickleball is often called the fastest-growing sport in America. According to USA Pickleball, in 2020, the sport grew to 4.2 million players in the U.S.

"Many NHL players use pickleball for cross-training— it's great exercise, fun, and injury averse. It's a natural alignment for Baddle to lean into a group with high visibility that is already fascinated with our sport," noted Kara Anastasiadis, President of OvareGroup Outdoor.

According to 2021 research by Statista, the most avid NHL fans are ages 18-44, with the largest segment ages 35-44. This directly aligns with the sport of pickleball and the largest population of players by age. Beyond just age, Pickleball University reports that among its own readers' interests, hockey is the fourth most popular activity, behind tennis, golf, and cycling, and ahead of basketball, football, and baseball.

"The NHL partnership gives Baddle the ability to reach across borders in ways that other leagues cannot. Pickleball is more than just a North American sport and is growing rapidly in many emerging markets," added OvareGroup CEO Jordan F. Reber.

Baddle is building its business on a combination of proprietary branded merchandise and strategic licenses. Baddle's line of Vera Bradley merchandise launched in November 2021, and it has also produced branded paddles for the U.S. Army and The Ohio State University. Baddle plans to launch its line of junior pickleball gear in Q2 2022.

NHL and the NHL Shield are registered trademarks of the National Hockey League. NHL and NHL team marks are the property of the NHL and its teams. © NHL 2022. All Rights Reserved.